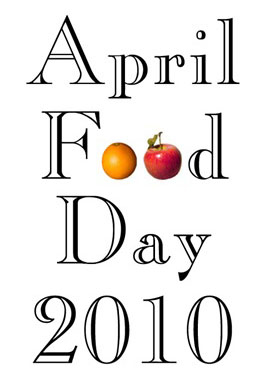 In 2009 Pigtown Design and Easy and Elegant Life teamed up to raise awareness of the challenges faced by food banks across the nation in these challenging economic times.  They called their mission April Food Day.  365 days later, the need is still great.  People are still unemployed, underemployed, and financially overwhelmed.  Food banks are a lifeline for a growing percentage of the population.

It’s been a year since I wrote my post for AFD2009.  In that time, The Mistah and I became intimately acquainted with the recession and unemployment.  We looked for ways to save money.  And honestly, one of the first things to get cut was the food budget.  It was  a challenge.  It was psychologically bruising to go from grocery shopping at Harris Teeter, Safeway, and (sometimes) Wegman’s to food shopping at Target and Walmart.  But when your income is cut by 60%, you do what you have to do.

It’s about survival.  And for some people, grocery shopping at Walmart, or Target, or at the local off brand grocery store is a luxury.  While I know that eating can be luxurious, it should never be considered a luxury.  Here are a few things to chew on:

If you are able to, I hope you will consider making a donation to Feeding America through the link that has been set up for April Food Day.  Even if you can’t make a donation, I hope you will participate in AFD by spreading the word.