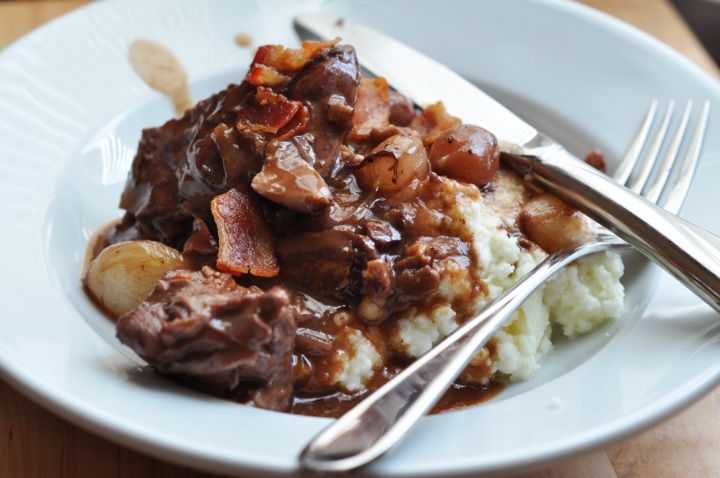 I don’t know what you think of this picture.  But I’ve tasted that meal.  And despite how unphotogenic it may be, it scores a perfect 10 on taste.  Braised chicken, BACON, rich wine sauce, and pearl onions.  How could it be anything but good?

Despite the fact that this recipe is the brainchild of Cook’s Illustrated, this is not a sign that I have called a truce with his Bowtiedness.  I remain resolute in my stance that I will never again contribute to CK’s golden parachute through yearly subscription fees to the magazine.

I haven’t yet named a replacement for CI.  But I’m holding follow up interviews with Fine Cooking, Bon Appetit, and Saveur.  It would really sway my opinion if one of those titles had something magically delicious like this in an upcoming issue.

BAH Note:  CI calls for boneless, skinless thighs to be cut in half.  I used a combination of boneless and bone in thighs.  If you use bone in thighs, you wont’ be able to cut them in half but you will still want to remove the skin and as much fat as possible.  If using boneless thighs, your cooking time will be less than mine.

Combine wine, chicken broth, bay leaf, and thyme in a saucepan.  Bring to a boil over medium high heat and reduce by half.  Once reduced, remove from heat and discard the thyme and bay leaf.

While the liquid is reducing, cook the bacon in a dutch oven over medium heat until well browned and the fat has rendered.  Transfer the bacon to a paper towel lined plate and drain off the bacon fat.

Return the chicken and any accumulated juices to the pot along with half of the bacon.  Bring to a boil, cover the pot, reduce the heat and simmer for 45 minutes until the chicken is cooked through, stirring occasionally.

Serve the chicken and sauce garnished with the rest of the bacon.

According to Cooking Light, this SHOULD have been a super quick dish.  However, in my kitchen, nothing is what it SHOULD be.  In my kitchen, as in my life, it just is what it is.  Which is usually me making things harder than they really have to be just because I’m stubborn like that.  And what this is, is a pretty easy chicken in wine sauce.  It won’t necessarily knock your socks off.  But it won’t require you to spend hours preparing it either.  It’s a trade off I can live with. END_OF_DOCUMENT_TOKEN_TO_BE_REPLACED