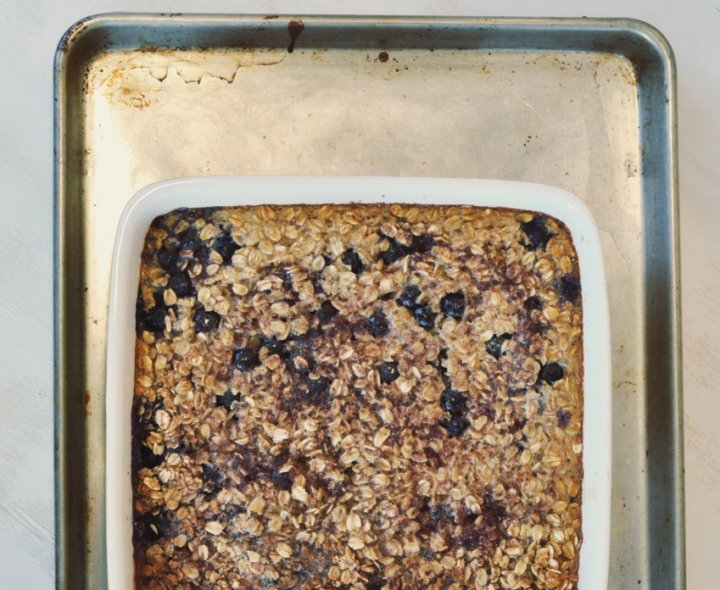 Oatmeal is a frequent guest at our table.  It’s usually the overnight, crock pot variety because I can’t be trusted not to hit the snooze button (three or four times) in the morning.  Since that leaves very little time for fixing a proper breakfast from scratch, you can often find us reheating a portion of the crock pot oatmeal and fancying it up with dried fruit or jelly.

I printed out a few different recipes for baked oatmeal because The Universe sent me to them and sometimes you just need to shake things up a little bit.  I know that crock pot oatmeal is  reliable but that doesn’t mean that I can’t check out the competition.  So yes, I cheated on my breakfast.  I cheated on something that has never let me down; something that has been nothing but loyal to me.  And for what?  A little excitement?  A little newness?

Maybe it’s the guilt talking but as I got to know a few different incarnations of Baked Oatmeal, I couldn’t help but compare it to Crock Pot Oatmeal.  One was lifeless and dull; not even worth the trouble of turning on the oven to bake.  While another made me want to actually get up an hour earlier a couple of times a week to ensure a constant Baked Oatmeal supply. So what did I decide?  As much as it pains me to say this, I have to stay in my long term relationship with Crock Pot Oatmeal.  I blame that choice on butter, maple syrup, milk, and eggs.  Because those are the things that make me want to inhale an entire batch of Heidi’s Baked Oatmeal in a single sitting.  Those are also the same things that contribute to my expanding bottom line.

I suppose it’s possible to tweak this oatmeal so it’s more bottom line friendly.  But the thought of doing so results in Sad Wendi Face.  {tangent} For a 40 year old, it is not a good look. {end tangent}  Besides, that would be like telling yourself that it’s ok not to maximize your potential.  And how hard was the lesson about living up to our potential drilled into our collective heads?  Far be it for me to say that your baked oatmeal shouldn’t be all it could be.

So maybe instead of messing with a good thing (a la New Coke), this just needs to be elevated to Limited Edition status.  Hey, that sounds rather important and fancy doesn’t it?  Exactly like the baked oatmeal that has fulfilled it maximum oatmeal potential.

I guess the only question left is who wants to be the first person to come to my house for Heidi’s Limited Edition Baked Oatmeal?

Adapted from Heidi Swanson, as posted by Lootie + Doof

BAH Note: I had to tell The Mistah that he could not have seconds of this the morning I made it.  I wanted there to be leftovers.  But to be honest, I wanted to go back for seconds myself.  Without some self control, I could easily see us eating an entire batch of this in a single day….don’t judge until you’ve tried it.

Heat the oven to 375 degrees and grease an 8″ baking dish.

Combine the oats, baking powder, salt, and cinnamon in a bowl.  In a separate bowl, combine the maple syrup, milk, egg, vanilla, and half of the melted butter.

Arrange the banana slices, if using, on the bottom of your dish along with 1 cup of the blueberries.  Cover the fruit with the oatmeal and then add the milk mixture to the baking dish.  Add the remaining blueberries to the top of the dish and bake for 35 to 45 minutes or until the oats have set and the top is golden brown.

Drizzle the remaining melted butter over the top of the oatmeal and let cool for 5 minutes before serving.