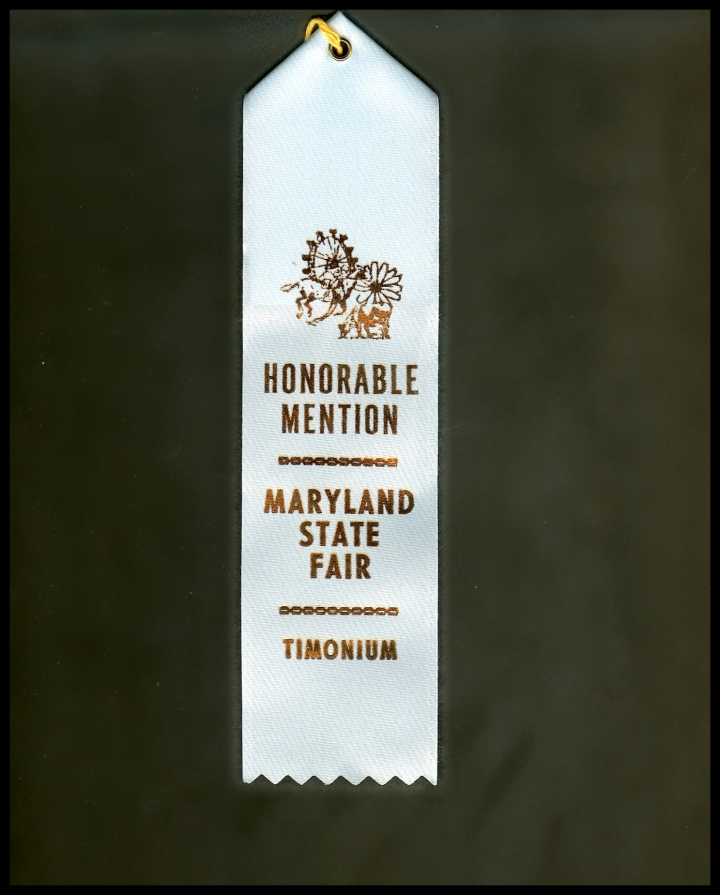 As I said in my interview with The Baltimore Guide, I take pictures because I enjoy it; I photograph what I see around me.  I don’t do it with the notion of awards in mind and I don’t go looking for a shot for the sole purpose of being praised.  However, if someone is so inclined to single out a piece of my work and say that it is worthy of mention, I’m not going to argue.

The funny thing about competitions is that you never know what is going to appeal to the judges.  Last year, I thought the images I entered into the Maryland State Fair were strong contenders for awards.  And I got squat.  This year, there were two that I really thought were worthy of recognition.  The rest were interesting but not powerful.  Guess what?  One of those interesting, but not powerful images got an Honorable Mention.  That there is my ribbon for the Tilghman Island landscape.  How did I celebrate?  By rocking out a Beef Stir Fry.

Ok, it wasn’t actually a celebratory Stir Fry.  It’s just what happened to be on the menu for that day.  But now that we’ve had it, I think it should qualify for an Honorable Mention of its own.

My only “beef” with this recipe is that it seems to take longer to prep than to actually cook.  Despite the multitasking of seasoning the beef while the rest of the ingredients get prepped, I felt like to took a long time to finally fire up the burner and get cooking.  However, you should not let that keep you from giving this a try.  The marinade gives the beef strips a balanced salty/sweet glaze and the sauce is every bit as good as you’d get from carryout. You should also be ready to get at least four different bowls dirty during the process.  I said it was good, I didn’t say it wasn’t messy.

I would suggest letting the dish cool off for a few minutes before serving.  In the time it took The Mistah and I to scarf down a plate of this with some brown rice, the sauce cooled a bit which made even more of the flavors come through when we went back for seconds.

I should have known better than to reheat the leftovers in the microwave.  The meat, which had been tender and perfectly cooked straight from the skillet got a little tougher after just one minute in the microwave.  I don’t usually reheat carryout leftovers so don’t ask me why I thought it was a good idea.  Enjoy those leftovers cold from the fridge or let them sit out briefly at room temperature.

BAH Tip: For easier slicing of the flank steak, let it sit in the freezer for 20 to 30 minutes to firm up slightly.

Drain beef and discard any liquid.  Heat 1 teaspoon oil in a large nonstick skillet over high heat until the oil is just smoking.  Add half of beef in a single layer.  Cook for 1 minute without stirring.  Then stir and cook until well browned, 1 to 2 minutes.  Transfer beef to a clean bowl, heat 1 teaspoon oil in skillet and repeat with remaining beef.  Using tongs, carefully wipe skillet clean with paper towels.

Add remaining tablespoon oil to now empty skillet and heat until just smoking.  Add mushrooms and cook until beginning to brown, about 2 minutes.  Add green beans, stir frequently, and cook, until spotty brown, 3 to 4 minutes (mine took about twice as long to start to spot).  Add water and cover pan.  Continue to cook until green beans are just crisp, 2 to 3 minutes longer (mine were perfectly done after just 1 minute).  Uncover skillet and push vegetables to the sides.  Add garlic and ginger mixture to the center of the skillet and cook until fragrant, 15 to 20 seconds.  Combine garlic-ginger mixture with vegetables.  Return beef and any accumulated juices to the skillet, and scallions, and stir to combine.

Whisk sauce to recombine then add to the skillet.  Cook, stirring constantly until thickened, about 30 seconds (mine took more like 2 minutes).