The following originally appeared on 6/2/08 at Exit 51

Know When To Say When

I have a handful of recipes that try and create homemade versions of popular treats – Thin Mints, Peppermint Patties, and most recently, Oreos. I adore the idea of a diy approach to a classic. Really, who wouldn’t jump at the chance to have Thin Mints anytime they wanted? Nothing to get in the way of enjoying minty thin goodness on a whim.

But here’s the thing that nobody says. It’s a lot of freaking work. I read over the recipe and think ’sure, I can do that’. But it doesn’t occur to me that this undertaking will consume hours of my life. Hours that I can never get back. And why? All because I had to see if I could do it.

And now that I have done it, I have decided that it’s just as well to buy the durn things. Because really, two and a half hours of my time to walk away with maybe three dozen “Oreos”? That’s just not a bargain to me.

Here’s how it all went down. The recipe was pulled from www.smittenkitchen.com which attributes it to Retro Desserts, Wayne Brachman.

In the bowl of an electric mixer, thoroughly mix the flour, cocoa, baking soda and powder, salt, and sugar. On low speed, add the butter, and then the egg. Continue mixing until dough comes together in a mass. Mine looked like this: 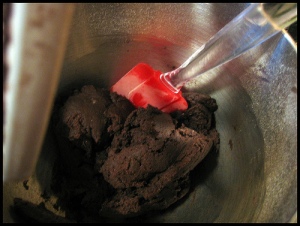 The recipe directs you to roll the dough into 1 teaspoon balls, flatten slightly, and bake at 375 degress for 9 minutes, on a parchment lined sheet pan , rotating the pan once. I found that this produced a puffy cookie. Not at all Oero like. So I chose to chill my dough, roll it, and cut with the smallest round biscuit cutter I have. This produced a much more consistent sized cookie. It also resulted in that thin wafer I expected in a sandwich cookie.

And it added a considerable amount of time to the overall process.

Once all the dough had been baked and cooled, I started on the vanilla filling:

Combine butter and shortening in a mixing bowl, and at low speed, gradually beat in the sugar and vanilla. Turn the mixer on high and beat for 2-3 minutes until filling is light and fluffy. Sounds easy enough and yet mine had the consistency of library paste and it stuck together in one big clump. So I added more butter and shortening and vanilla until it decided to become light and fluffy.

Now, according to the recipe, I should have been able to pipe teaspoon sized blobs of cream onto the center of a cookie, top with a second cookie, and be done with it. Nope, didn’t happen for me. After rigging up my piping bag out of a gallon storage bag and fitting it with a cake tip, that filling wasn’t going anywhere. So I had to cut my bag open, scrape the filling out with a small spatual, and apply it to my still naked cookies. By the time I was done, I had this:

I’ll admit they are good. But are they THAT good?

You’ll have to decide for yourself.

7 thoughts on “Flashback Friday – Know When To Say When”