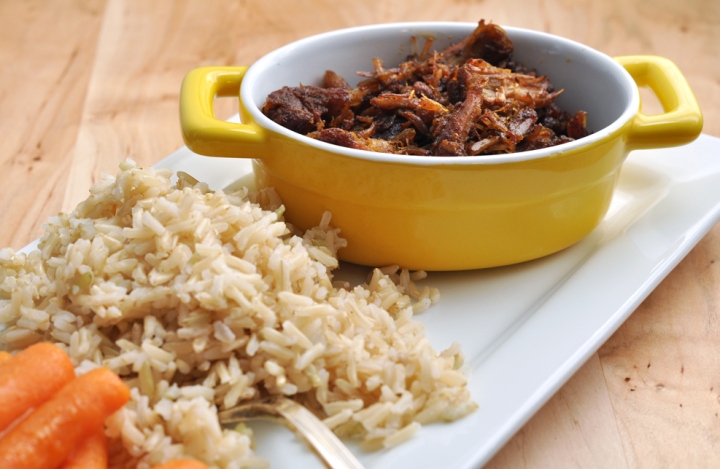 My method for meal planning is pretty straight forward and usually works without a hitch.  Before I go grocery shopping, I make up the week’s menu. If the recipe is coming from a cookbook, I use a shorthand notation on the menu of the title and page.  If the recipe is from a magazine or the web, I clip the page to the fridge with a magnet.  And yes, the recipes are in order by day of the week.  So basically, as the week progresses, I work my way through the clipped pages and cookbooks.  Like I said, this is usually a pretty flawless system.

Of course, there are times when it fails me completely.  Like when I somehow misplaced the one and only carnitas recipe that I had in my folders.  Somewhere between the time I wrote that week’s menu and when I went to get cracking on carnitas, the recipe vanished.  Disappeared into thin air.  As though it never existed and I had only imagined it.  I couldn’t remember which website I had pulled it from.

But the pork was thawed and there was no substitute recipe to fall back on.  So with the help of The Googley, I found The Food Addicts and their take on carnitas.  Like the culinary equivalent of a relief pitcher in the bottom of the 9th, it came through.  Pork was seared, braised, shredded and then set to rest overnight. The next day it got broiled until caramelized and crisp before being paired with brown rice and glazed carrots.

It might not have been the recipe I intended to make, but clearly it’s the one the Universe had in mind for me.

Adapted from The Food Addicts

BAH Note: I chose to cook this the day before I intended to serve it.  So I cooked the pork, shredded it into bite size pieces, and then refrigerated it overnight.  The next day I let the pork sit at room temperature for about 45 minutes before throwing it under a low broiler flame.  Of course, if you no likely the broiler, don’t feel as though you have to broil the pork before serving.  It would be just as good unbroiled.

Mix the spices in a medium bowl.  Add the cubed pork and coat the meat with the spices.

Heat the oil in a dutch oven over medium high heat.  Working in batches, sear the pork on all sides, transferring the seared pork to a plate.

Once all the pork has been browned, deglaze the pot with the chicken broth.  Bring the broth to a boil and scrape any bits off the bottom of the pot before returning the pork to the pot.

Carefully transfer the pork to a bowl and shred into bite sized pieces using two forks.  The pork can be served directly from the oven or it can be broiled on a sheet pan until the exterior is crisp and caramelized.